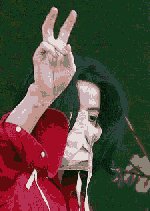 Like a starved flesh-eating virus or a Ding-Dong-addicted fatty, today’s media gorged on celebrity perversion to the exclusion of all else except the realization that drab old Laura Bush can make even Anne, the Princess Royal seem fashionable.
The usually DoublePlusGood CNN mounted a daylong campaign of innuendo, file footage and, my old favorite, unsupported speculation against a recent member of the cursed Minelli-Gest wedding party and his well-known, and I guess tolerated until needed, predilection for pre-teen boys.
Early on, Wolf Blitzer’s generic bloviation was fixated on “poor fragile Michael” Jackson with a relentless intensity missing from older and less sexy issues of war and leaks. Possibly because, in the words of faux-trendy Anderson Cooper, “Its all so sad.”
Is it?
Is this celebrity sideshow, hideous, as it might be for any allegedly real child victim, more tragic than war?
CNN, later in the day, answered my question within an idiotic reporter roundtable moderated by tonight’s more washy than wishy Aaron Brown. Of course the topic was Michael Jackson and an excited guest, after a silly bitch fight with Court TV's Diane Dimond, gushed that the Jackson story would be “the biggest story of 2003. Bigger than the Iraq war!”
To their most likely inadvertent credit, Brown and another moon-faced talking head were befuddled into a few seconds silence by the gross stupidity of the statement. One could clearly see, in their large cow eyes, a realization that, perhaps, a line had been crossed.
It had.
I really think CNN owes an apology to the families of our soldiers.
This perverted sideshow is only that.
Any comparison to the sacrifice of our military in these last few years of war is despicable and any suggestion that their sacrifice has less news value than Michael Jackson’s current crisis is a true perversion of the first magnitude.
I think an on-air apology by CNN must happen.

As “The Invisible Visitor” flew into “Fortress London”, I was occupied watching laughable media and right wing hyperventilation following a 4-3 ruling by the Supreme Judicial Court of Massachusetts which invalidated a state ban on same-sex marriages and redefined the Massachusetts common law definition of marriage as "the voluntary union of two persons as spouses, to the exclusion of all others."
I’ve neglected blogging for the preparation of a meal of specific thanksgiving that also handily serves as a dry run for next week’s more general holiday.
In the midst of the hot air may I offer some photographs for your consideration?

This first is from David Deitcher’s Dear Friends: American Photographs of Men Together, 1840-1918.
The picture of two seated men was taken in 1860.

This is a frame from Edison’s 1895 experimental sound film The Gay Brothers.

And, this is a newspaper photograph of the very happy 1939 National League Champion Cincinnati Reds. 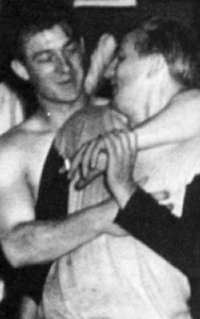 Note, on the far right side of the photo, the particularly intimate public embrace.
The book containing this image does not identify these players and I am not suggesting anything about the sexuality of the men in any of the photographs.
I am suggesting, no matter today’s naïve fundamentalist outrage, the wacky perversions of a predatory media and ubiquitous technology that human behavior has changed little over the millennia. 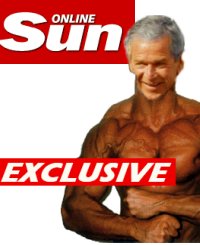 The pace of the winter months, living for the past three years in this 120 year old home within the most ancient parts of the metropolitan core, is dominated by the maintenance of the three remaining fireplaces out of the house’s original five.
It is constant pre Industrial Age work and can be so labor intensive that I can, when home alone, only maintain one fireplace.
The fire, I realized early in my first winter, is, both by the effort of its maintenance and the comforting contemplative glow of its warmth, a ritual that affords tremendous solace and, I would argue, healing to a besieged post-modern human soul.
Bread making, I personally discovered some years ago, is another of these labor intensive but highly comforting lost human rhythms.
Bread baking, like having a maintained fire, is a skill learned directly from my parents and grandparents.
When I bake, I have the great fortune to use some of the same utensils my Mother and Grandmother used when I was a child. And, as a result, the process can often be as fulfilling, if not as tasty, as its resolution.
I have found it highly rewarding to incorporate some of these older rhythms into the enervating blur of 21st century life.
So this past weekend, under the woodpile-bound watchful eye of my adopted and amazingly intelligent neighborhood cat, I, seeking balance, maintained a fire, read, listened to BookTV and baked bread.
The closeness of President Bush and the media’s faraway war became, again, apparent this past Friday evening.

After posting a link to his excellent, spare and very much in the now report from Baghdad last Thursday, I used the email link at the end of the story to write photojournalist Michael Kamber and express appreciation for the fresh insight afforded by his brave journalism.
Friday evening I received his very kind reply.
Unlike my friend Becky, who has emailed her nephew serving now around Tikrit, I have not before had an email from the war zone.
I pray that opportunity does not arise, as my only nephew of military age, bedeviled by a High School football injury, seems soon to join his adopted brother and thousands of other Kentucky boys now serving.
I was happy to tell Mr. Kamber that I was going to include him in my prayers and gratified hat he took the time to reply considering, as he emailed, “things are pretty bad here”.
This past weekend has been particularly somber across the soft hills of the Commonwealth as this war continues to take a heavy toll among the sons of this ancient Ohio River valley and beyond. A pall of truth lingers like smoke from a wood fire that belies the soul-tormenting and ubitiquous partisan babble.
I found a weekend BookTV lecture by John McWhorter, Associate Professor of Linguistics at UC Berkeley, about his latest book, Doing Our Own Thing: The Degradation of Language and Music and Why We Should, Like, Care, highly interesting and will reserve it at the library.
A news story, removed from the weekend casualties in Iraq, caught my eye while perusing Sunday’s London Observer.
The headline, ‘Shoot To Kill’ demand by US, would, seemingly, catch the eye of most folk blessed with sight.
Included in the shocking revelations:

The Americans had also wanted to travel with a piece of military hardware called a 'mini-gun', which usually forms part of the mobile armory in the presidential cavalcade. It is fired from a tank and can kill dozens of people. One manufacturer's description reads: 'Due to the small caliber of the round, the mini-gun can be used practically anywhere. This is especially helpful during peacekeeping deployments.' Ministers have made clear to Washington that the firepower of the mini-gun will not be available during the state visit to Britain.

Does our President travel domestically with this mini-gun?
As I’ve posted before in this space, our President only travels to and speaks before highly selected and screened supporters, military and government personnel or high-rolling contributors.
Is this article really telling me that the presidential security detail have, as a matter of course, aimed a live machine gun at the ordinary and pre-screened Americans who sometimes surround this President?
Is it any wonder I ran to my flour canister?

As I indicated before, bread making soothes both baker and grateful consumer. The feel of the kneaded dough, the smell of its raising and baking and, of course, the eating of warm buttery slices connects to long neglected human needs.
Forgo manufactured bread for once, reserve about 5 hours of your precious time and commune with your ancestors by attempting this nearly foolproof and very simple white bread recipe:

Mix Yeast with Sugar, Salt, warm Water and Egg in a large bowl. Cover and set aside for 5 minutes.
Gradually add 3 cups of Flour, beating and scraping until smooth. Add Oil and 3 to 4 cups of Flour until a stiff dough forms.
With floured and ring-less hands, turn dough out onto a floured board. Knead dough 5 to 8 minutes by pressing palms flat into dough and turning it back onto itself, flouring as needed but not heavily.
Place dough in a large well-greased bowl. Turn dough once in bowl so that oil covers dough’s top surface. Cover bowl and place in a warm spot for 2 hours or until doubled in size.
After this first raise, punch down dough and divide into thirds. Roll each piece on a floured board into approximately a foot long tube having a 1 inch in diameter. Place the three dough tubes onto a greased baking sheet. Pinch one set of ends together and braid the three pieces of dough. Pinch opposite ends together, cover and place in a warm spot to raises until doubled in size.
Bake at 350 for 20 to 25 minutes or until golden brown.
Lightly butter hot crust.
Bliss!