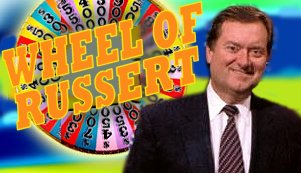 Coping with a busy Saturday, I still had time to laugh at a brief Washington Post story linked by the terrific local Washington, DC media site DCRTV.com:

Harvard students put their education to good use...in a rousing game of Tim Russert bingo...[Students] read that Russert uses at each graduation ceremony a modified version of his commencement speech...[They] looked up the text, printed up bingo cards with key Russert phrases in each square and passed out the cards to 50 classmates before the event...[Max] Brodsky said. "If they get five in a row, they can shout out, 'bingo!' And people did."

Through AmericaBlog and according to the Toledo Blade:

“Someone in the governor’s office has a loose interpretation of what the truth is."
--House Minority Leader Chris Redfern (D., Catawba Island) 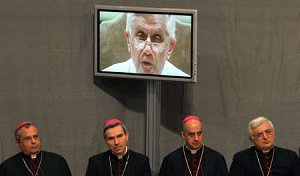 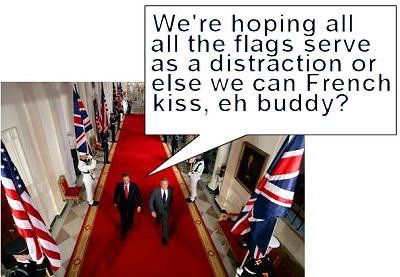 C reported on his recent talks in Washington. There was a perceptible shift in attitude. Military action was now seen as inevitable. Bush wanted to remove Saddam, through military action, justified by the conjunction of terrorism and WMD. But the intelligence and facts were being fixed around the policy. The NSC had no patience with the UN route, and no enthusiasm for publishing material on the Iraqi regime's record. There was little discussion in Washington of the aftermath after military action. 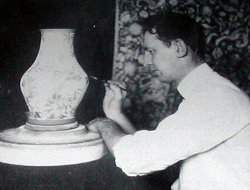 “Billy” Hentschel was a very important proponent of Modernism in the early 20th century Cincinnati Art Pottery movement as well as within a diverse range of other media including oil, airbrush, leather work, textile design and interior and exterior decorative arts.
Information on this important American artist isn’t widely known, as a Google search can quickly attest but, thanks to the research of Nick and Marilyn Nicholson and Virginia Raymond Cummins, we can glimpse this extraordinary talented man who helped define the modern taste for the post WWII American generations.
William Ernst Hentschel was born in New York City in 1892.
The date of Hentschel’s exact arrival in Cincinnati isn’t known but, as Nick and Marilyn Nicholson pointed out in an article written for the Kenton County Historical Society’s excellent quarterly magazine Heritage (Spring/Summer 1997), the first Cincinnati reference to Hentschel is a credit in the Rookwood Pottery shape records for designing a cat paperweight in 1911.
In 1911, Billy Hentschel would have been 19 years old. 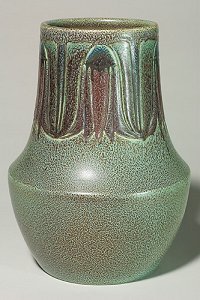 Within the 20th century’s Roaring Teens, young Hentschel, likely mentored by older and indulgent Rookwood artists, attended the Cincinnati Art Academy and pushed the envelope of pottery decoration, as can be seen in this Ombroso glazed vase from 1915 sold yesterday in the CAG Spring Sale, while becoming an important design voice within Rookwood’s new Architectural Faiance department.
Hentschel’s fiery nature, suggested by his daring artistic foresight, comes into yet sharper focus when one contemplates his tempestuous relationship and first marriage to Cincinnati dance instructor and performer Halina Feodorova.
While little is known of this relationship, Virginia Raymond Cummins, in her excellent Rookwood Potpourri writes that:

The marriage was not a happy one and ended in divorce.

I have to imagine, reading heavily between the lines of Cummins' one sentence, that the young Hentschel, the pet of many prominent Cincinnati artists and with an exotic Russian dancer on his arm, cut a wide swath in boomtown and labor troubled Cincinnati’s early 20th century social scene. 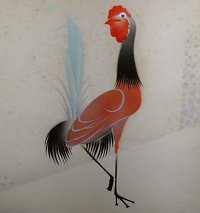 Indeed this favorite image of Hentschel’s pioneering work with airbrush and frisket, salvaged from a Delaware estate, lovingly conserved and from the period of Hentschel’s relationship with Feodorova, seems, though an image of a Rooster, more imbued with a certain dancer’s defiant stance and Russian hauteur.
By the mid 1930’s, according to the Nicholson’s Kenton Hills Porcelains, “Hentschel’s [first] marriage had dissolved”.
The 29 year-old Hentschel became in instructor at the Cincinnati Art Academy in 1921 and, throughout the Roaring 20’s and 30’s, worked in leather, batik and his airbrushed Aquatones all while continuing his work at the Rookwood Pottery.
In 1939, a pivotal year, Hentschel again married (this time a former Art Academy student and fellow Rookwood decorator Alza Stratton) and joined ranks with a small group of Rookwood employees disgruntled with the pottery’s short-sighted and old school business practices by leaving the pottery and starting the short-lived Hentschel-Bopp or Harold Bopp Pottery which then became the equally short-lived Kenton Hills Porcelains in Villa Hills, Kentucky.
Bopp, a Rookwood chemist who had argued for modern kilns before the pottery’s deaf management, found his modest revenge in the superb glazes produced by his new company’s modern kiln. 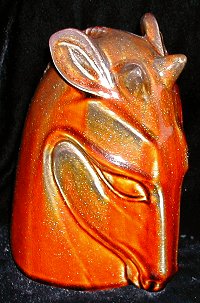 The Goldstone effect has tiny bits of what appear to be gold underglaze.

A particular triumph was the achievement of a glaze rivaling Rookwood unrepeatable Goldstone effect as seen in this Kenton Hills horse sculptural entitled Nemo and designed by Hentschel.
Hentschel, Bopp and David Seyler’s fledgling Kenton Hills pottery ended with the arrival of World War II.
According to the Nicholson’s:

In 1944, Hentschel stopped teaching at the Art Academy and began to explore oil painting. 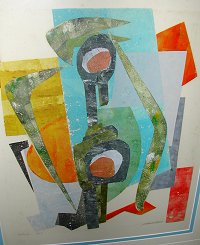 By the early 1950’s he had modified his Aquatone airbrush technique by creating “brayer” stencil paintings such as this example of a limited signed and numbered series of 25 entitled Kakapo I.
The contrast between the Rooster aquatone produced amid the joie de vie of Hentschel’s youth and the somber post nuclear fowl shown in the 50 year old Hentschel’s Kakapo I is, I feel, a stark testament to what young Billy’s century of progress became.
William Ernst Hentschel died in 1962 and is buried in Lexington, Kentucky.

Note
I would highly recommend the Rookwood artist biographical sketches contained in Virginia Raymond Cummins Rookwood Pottery Potpourri as well as the Nicholson’s excellent Kenton Hills Porcelains.
The Cincinnati Art Galleries published Rookwood Pottery Potpourri while the Nicholson’s book was self-published.
I know the superb staff at the CAG would be happy to answer any question regarding reference materials.
Further examples of Hentschel's "breyer" work can be found at the Annex Galleries while other examples of his Kenton Hills work can be found in this June 10, 2004 post. 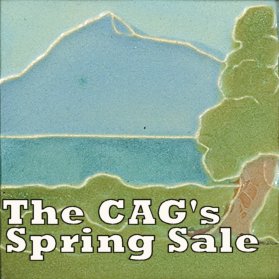 A brutally hot summer weekend here in the Queen City of the West, saw ceramic and art glass aficionados gathering in the air conditioned upper recesses of the Cincinnati Art Galleries for their annual spring auction.
Sales were surprisingly brisk with occasional bursts into the high five figures for festive attending, phone, Internet and absentee bidders witnessed in today’s Rookwood Pottery event.
Noticed on the bidding floor were people from Boston, Atlanta, and Chicago as well as a sizable representation from the local three state regions of Ohio, Indiana and Kentucky along with a well-traveled portion of the American Art Pottery Association membership who seemingly just left town following the AAPA convention in April.
While obviously the pots were a major draw, I can’t help humorously wondering if the delicious chili served by the CAG’s excellent catering service helped draw paying customers.
I wanted a second bowl but, sadly, this superb more Texan than Cincinnati style chili sold out in short order as plastic spoons flashed across the high end bidding floor.
This year’s auction seemed smoother and less beset by internet and phone bid contretemps than previous years or, perhaps, it was more that caustic auctioneer J. Louis Karp was possibly a teensy bit more mellow than in years past.
No great shakes however as Gallery owners Randy and Michelle Sandler have to be celebrating excellent sales including several excellent hammer prices all mellowed auctioneers notwithstanding.

There were several standout items including this beautiful 18 ¼ X 40 inch Architectural Faience mural comprised of several irregular shaped and matte glazed tiles which sold for $30,000 over its high estimate, in spirited bidding, to a phone bidder for $39,000. 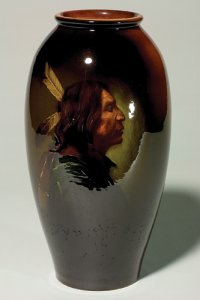 This 1898 14 ¾ inch Standard Glaze Indian portrait entitled “Striker Apache” by Matt Daley sold to a rather relaxed floor bidding gentleman for $ 25,000 or $5,000 under its low estimate. 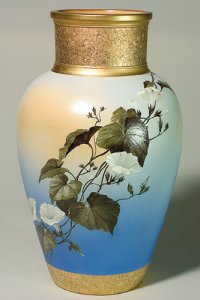 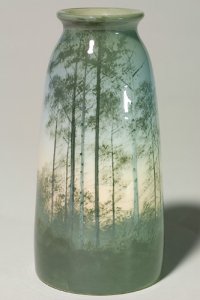 And, this small 7 ¾ inch but rare Iris glazed scenic vase by highly popular Japanese artist Kataro Shirayamadani achieved, after a feverish floor battle, a whopping $14,500.
In addition to a great many hammers in the high five figures, animal figurines of kitties, puppies, and fowl or anything signed by artists William Hentschel or Lorinda Epply seemed to easily zoom over their high estimates.
I, also, felt this year’s Ebay Live bidders showed a tad more dignity and discernment in their acquisitions than in previous years when Internet bidding more resembled a crazed paraná or piranha feeding frenzy.
As in previous sales, floor, absentee, and phone bids are subject to a 15% buyer’s premium while successful Internet bidders pay a 20% buyer’s premium.
Copies of the catalogue are still available through the CAG and all catalogue purchasers will receive a list of hammer prices as soon as the CAG staff compiles and collates one.