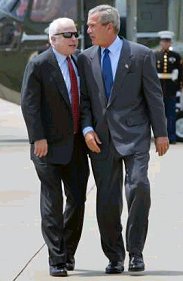 Returning from a 50th birthday break, I discover Blogger has changed something.
This change prevents my linking to sources.
The trusty Eric has sent a line of code.
This post will determine its effectiveness. 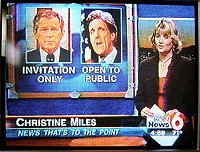 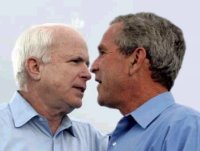 Always a sucker for a pretty face and a forced compliment, President George W. Bush kissed Senator John McCain before shocked conservative crowds in Pensacola, Florida this afternoon.
Dispite video of this kiss airing on CNN, the President's brief flirtation with "the wild side" has thusfar escaped print reportage.
The Senator will overnight with the President at the Crawford ranch before another day of passionate campaigning.
I'm wondering if this campaign "swing" is stag?

The Khan Game
Will Mohammed Naeem Noor Khan join Valerie Plame in the outed operative waiting area or How many Treasons Can A Bushchuck Chuck? 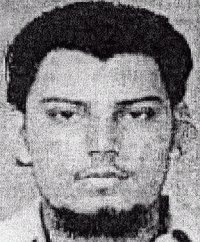 Last Sunday, U.S. officials told reporters that someone held secretly by Pakistan was the source of the bulk of the information justifying the alert. The New York Times obtained Khan's name independently, and U.S. officials confirmed it when it appeared in the paper the next morning. None of those reports mentioned at the time that Khan had been under cover helping the authorities catch al Qaeda suspects, and that his value in that regard was destroyed by making his name public.

The British press, this morning, is buzzing about the arrest of Mohammed Naeem Noor Khan in the remote Pakistani city of Lahore on July 13, 2004 and the news that his arrest was possibly political and a setback for the War on Terror.
From The Guardian’s Sunday Observer:

Pakistani officials told their American counterparts…that Khan had been in touch with six 'jihadi associates' in America.
…Intelligence officers prevailed on Khan to work for them. It is not known how he was persuaded to co-operate. The 'deal' was thrashed out at a prison where abuse is commonplace. Last weekend, the young militant finally sent emails to scores of activists in America, Indonesia, Malaysia, Pakistan, India and Bangladesh. He requested that they get in touch urgently. As the emails came back, intelligence officers all over the world went into action.

And, in a separate Guardian story:

The Home Secretary has warned that American-style openness over the al-Qaeda threat risked exposing politicians to 'ridicule'…Blunkett's words reflect a growing row over political handling of intelligence, with accusations in Washington that George Bush may be overemphasizing the threat in order to boost his chances in November's presidential election.

It emerged last night that Khan was forced to take part in an undercover sting to help British and US officials.His arrest was kept secret and he was made to continue talking to his contacts around the world — including those in Britain and at least six in the US…A senior government official in Islamabad said: “During his detention he regularly communicated through email with the al-Qaeda operatives.”

Khan is believed to have accessed the websites of airlines to collect data about the flight schedules of aircraft landing at Heathrow. He also compiled data on the busiest underpasses used by passengers and the most crowded shopping malls. This information was then passed to his colleagues in Britain through encrypted e-mails.

Meanwhile, this morning’s New York Times seems shocked that terrorists might be planning to disrupt our elections and, as usual, shuffles the most relevant information to the jump page:

One senior counter terrorism official said…The inquiry has caused strains between the United States and Britain. There were signs that some British authorities might not have agreed with the White House decision to make public information about the surveillance operations… A report by Reuters in Pakistan said Mr. Khan had been secretly funneling information about Al Qaeda to Pakistani authorities and that his arrest and subsequent identification in news accounts may have cost the United States a valuable source. American officials contacted on Saturday would not confirm whether Mr. Khan was a mole or double agent.

It seems to this gullible Midwesterner that Khan as a con, a seeming Tokyo or Karachi Rose, would have been a far more effective tool in the continuing War on Terror rather than a one-time-shot Bush political venue.
I hope President Kerry will end the dangerous and possibly treasonous political expediencies hamstringing America's defense.