Dan Bartlett, the presidential advisor, enforcer and variable-memory witness, Friday morning pasted his worn “Aw shucks, Ma’am” grin in the space directly under his shark eyes in appearances on the morning news programs intended to further the slurs first hurled by Karl Rove in New York City Wednesday evening.
As usual the networks played their part beautifully affording Bartlett easy questions and no distracting Democratic presence to muddle a Phase II spin that posits a White House “somewhat puzzled” and “not sure” regarding outraged demands for a Rove apology or resignation.
One doesn’t have to listen particularly carefully to the presidential advisor to see the holes in the White House defensive spin.
Bartlett says Rove’s intemperate remarks were, “very specific, very accurate” and directed at the grassroots political organization MoveOn.org.
Really, Dan?
Having read various media reports including the New York Times story I linked to Thursday, I didn’t read of Rove making a specific or accurate sentence linking MoveOn.org or Michael Moore in the specific sentences that sparked this controversy.
Rove, specifically and accurately, chose a word Republicans have long used to smear Democrats.
Rove, in sentences absent “MoveOn” and “Moore”, accused “liberals” and that use was intentional and, obviously considering the coordinated remarks by Ken Mehlman and a new RNC web video entitled “Wild Thing”, part of a fresh effort to distract citizens and the easily distracted corporate media from Bush administration failures.
Unfortunately for the once “boy genius”, Americans, increasingly weary of Bush excuses, war and the rising costs of energy and food, are not, now, so easily suckered.
Karl Rove as a sophisticated and knowledgeable Presidential Advisor is not as naive as he would like the rest of us to be.
Rove spoke as a representative of the United States government and in this role his grossly unwise statements have slandered half the population of the nation.
The President if he had a shred of the moral decency he loves to claim would have, by now, asked Mr. Rove to pen a brief letter of resignation.

NOTE- The image intended for this post can be found on Easy With Eyes Closed.
Sorry for the giant white field topping this space but it seems to be an unwelcome remnant of Blogger's software upgrade and, hopefully, will disappear soon.

OneMore NOTE- This post was originally published Friday.
I was hoping to rectify the Blogger software upgrade white field by reposting but all I accomplished was to have the same mess appear with a Saturday date.

Rove Has To Go! 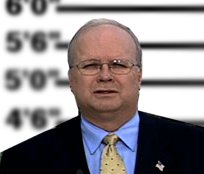 Acccording to reports in the New York Times and other media, the President's bloated political svengali Karl Rove, likely panicked by the public's growing discontent with all things Bush, last night in Manhattan attempted another of his trademark wedge efforts by, again, blaming "liberals" for coddling terrorists and "putting our troops in greater danger":

"Liberals saw the savagery of the 9/11 attacks and wanted to prepare indictments and offer therapy...for our attackers...Al Jazeera now broadcasts the words of Senator Durbin...putting our troops in greater danger. No more needs to be said about the motives of liberals."

Senate Minority Leader Harry Reid, according to AmericaBlog.com, had this reaction:

Karl Rove should immediately and fully apologize for his remarks or he should resign...It is time to stop using September 11th as a political wedge issue. Dividing our country for political gain is an insult to all Americans and to the common memory we all carry with us from that day.
When it comes to standing up to terrorists, there are no Republicans or Democrats, only Americans.

A Republican candidate for Chief Justice of the North Carolina Supreme Court, in related news from RawStory.com, has resigned from the Republican Party:

Rachel Lea Hunter, a Republican and a candidate for Chief Justice, likens Bush’s administration to the “Nazis” and says that all who disagree with the administration are being branded as “traitors”.

Wow!
Is Rachel psychic or what? 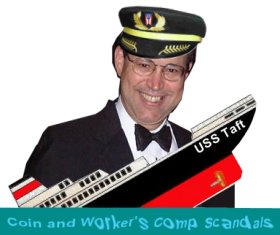 Here on the northernmost Kentucky hills, one can smell the stench wafting across the Ohio River.
According to this morning's Toledo Blade:

Gov. Bob Taft last night admitted that he had failed to include golf outings on his annual financial disclosure statements...A source...said that Tom Noe, a Toledo-area coin dealer at the heart of the state investment scandal, told him at Toledo’s Inverness Club in 2002 that he was playing golf there with Governor Taft...State law requires officeholders to list each source of gifts over $75. A round of golf at Inverness for a guest is about $140...Mr. Taft has hired an attorney to represent him on the matter.

Here's a photo of President Bush with Mr. & Mrs. Tom Noe from the BushCheney04 web page.

With various proofs of the President’s historic decline into lame duckiness coursing through the blogs and the corporate media, I thought I’d relate a brief and horribly sad Duck Tale of one former supporter.
This person, a friend, was only a few months ago unable to tolerate even modest criticism of Poppy and Bar’s eldest.
Today, this individual’s loyalties have been withdrawn from Mr. Bush and I have to imagine the particular set of circumstances causing this abrupt change is happening and will happen elsewhere in our country.
What caused this loyalist to see Mr. Bush stripped of his glory?
A 14 year-old son caught abusing the cheap Afghan heroin currently flooding America.
A family suffers unspeakable tragedy and an innocent young man is potentially destroyed so that an illusion of an economically viable fledgling Afghan democracy can, sort of, exist in tandem with the illusion of a President’s leadership.
A heavy price and one a former two-time George W. Bush voter has been forced to pay with their young child. 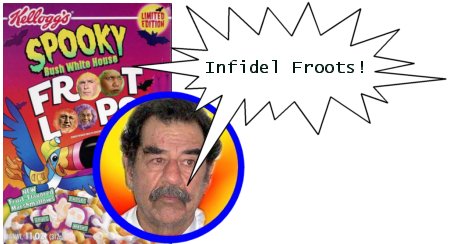 Are we really sure Saddam wasn't making a more subtle declaration couched within a breakfast cereal metaphor?