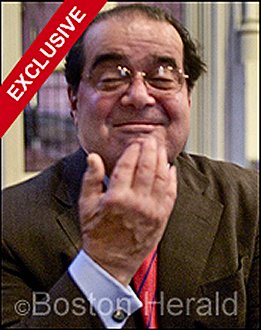 Imagine poor Justice Scalia’s horror to see the proof of his intentional fibbery, an image of his controversial “hand gesture”, and an interview with the photographer splashed across the Boston Herald and consequently the internets this lovely spring morning.
According to the Herald’s interview with Peter Smith, an assistant Professor of Photojournalism at Boston University who was freelancing as a photographer for the Archdiocese of Boston’s newspaper last Sunday morning, Saint Tony was fully conscious of his spontaneous impiety when responding to a question by a reporter:

“The judge paused for a second, then looked directly into my lens and said, ‘To my critics, I say, ‘Vaffanculo,’ punctuating the comment by flicking his right hand out from under his chin, Smith said…”It’s inaccurate and deceptive of him to say there was no vulgarity in the moment…[He] immediately knew he’d made a mistake, and said, ‘You’re not going to print that, are you?’”

Scalia has denied that his behavior was obscene and describes a more innocent hand gesture than the one captured by Peter Smith in a letter sent to the Boston Herald Tuesday.
According to About.com’s Italian Slang Dictionary:

vaffanculo (vulgar—contraction of the expression "Va' a fare in culo" up your [buttocks].) insult. 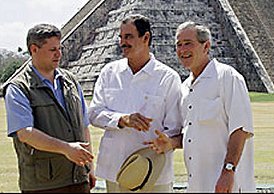 Who's the fellow with the two Cabaña boys? 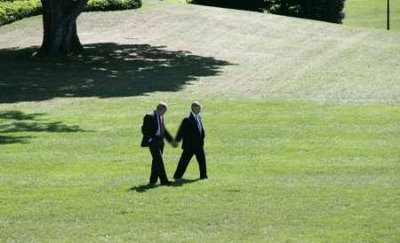 The President and Josh Bolton get reacquainted yesterday afternoon during a romantic outdoor stroll.

St. Tony of the Righteous Finger 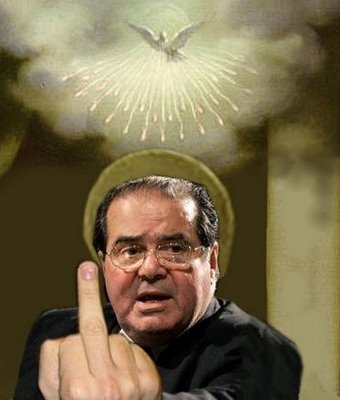 Could reporters really have confused an obscene hand gesture given to them outside Boston's Cathedral of the Holy Cross by Supreme Court Associate Justice and fascist lunatic Antonin Scalia on Sunday?
After a photographer for the Diocese of Boston's newspaper The Pilot snapped a photo of Scalia's finger the persnickety darling of 15th century judicial thought waved a censorious hand and ordered the graven image struck from the little newspaper's publication cue.
Not satisfied with his usual habit of crushing accurate press coverage in situ, Scalia, the high court's loudest and most fertile arbiter of heavily controlled individualism, now seems, through the kind assistance of corporate media's most pitiful news operation, intent upon rewriting the recent history of his troublesome and highly individual hand.
Saint Justice Scalia should live up to his principles and pluck the offending finger from his troubled appendage.

NOTE--My 75 year-old father is doing well following a heart valve replacement and a bypass.
My most sincere thanks for your prayers.