Never before have I watched Irwin Allen’s star-filled 1974 disaster epic Towering Inferno until this New Year’s Day on the horrible commercial-filled remnants of the AMC channel. 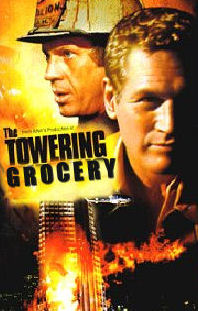 The campy 70’s schmaltz and entertainingly gruesome dead star hunting can only carry a tedious plot and phoned-in acting so far in this future world of 2005; I tuned out after Robert Wagner burst into flame as still scores of artificial fiber-clad golden age Hollywood glistened and emoted in the smoky gel light.
I can’t imagine I’m the first to note the spooky September 11th visual parallels in this film, however, a rather ordinary event I witnessed yesterday forces my mind to a more original if disheartening post tsunami idea.
Is our beloved but purposely corporate spoiled America the helplessly oblivious party on the 135th floor?
Yesterday, as snow melted in a 60-degree warm wave, I, finally, made a visit to the gym and performed a few errands.
The few local businesses I visited, veritable ghost towns since the Wednesday before Christmas, were swamped with cash-flush thawed customers.
Even within the gray foggy gloom of yesterday’s melt, shopkeepers were smiling, as were customers, that is, until I joined hundreds of others inundating an almost terminally crowded large local grocery.
Escaping the endlessly circling ranks of cars fruitlessly hunting convenient parking and my niggling doubts over the necessity of this particular grocery visit, I parked in a remote corner of the far-flung parking lot and entered the ranks of frustrated white upper middle class Protestant Christianity hunting bread and milk.
The store was a sight to behold.
Endless twisting lines at all of the 16+ check-outs and aisles jammed with carts and older ladies sporting rabbit collars, bubble hair and tag-along pissed-off husbands and/or elderly parents, for a moment, made me grateful there were just a few young mommies propelling those ungainly and huge child-friendly carts resembling trucks or airplanes.
The psychic tension was palpable and the socially maintained pretend Christianity was wearing dangerously thin.
Three, no four times I was nearly run over and I simply lost count of the times my cart was banged aside and my position in front of Product X usurped.
Several muttered, “My parents are with me,” as, I guess, righteous self-justification; after all, a lone single male shopper couldn’t really need that much food.
Once I had collected my items, I found the end of one particular twisty checkout line and took my place.
Here, so close to the exits and freedom, the high tension escalated.
A surprising number, spouting a perfunctory “Excuse me”, if anything, pushed through the lines as if in search of a fast-moving Express.
A half-hearted examination, to even a half-witted observer, would have revealed that the Express lane, too, was packed with folks having more than 12 items.
Near my line two women, a mother and overweight daughter in a store-acquired cart vehicle, panted heavily, tried to look pitiful and bitched at each other through clenched teeth instead of just simply getting into a line.
With bulging panic-stricken eyes and fat heavily jeweled fingers, the ladies’ small carts brimmed with frozen fruit pies, artificial dessert topping and other sweet/salty snacks.
This twosome wasn’t on a vital hunt for necessities and appeared to want a Deus ex Machina escape with their non-vital goodies.
The fellow immediately behind myself in line was, happily, sane and we chatted about the absurd panic and anger emanating from the packed and well-to-do representatives of local humanity.
The checkout line, while seemingly slow-moving at first, picked up speed and, thanks to one of my favorite checkers (the union rabble-rouser), I quickly exited the New Year’s Eve grocery hell.
The experience bothered me.
I kept thinking about the millions suffering through the unspeakable privations from the tsunami’s aftermath contrasted with the spoiled insensitivity witnessed from slight overcrowded disruptions at the grocery.
If a horror akin to the tsunami happened here would we survivors join in kinship or dissolve into covetous squabbles?
I sincerely hope we could join in harmony but I just don’t know for sure.
Thirty-one years later are we all just so many William Holden, Jennifer Jones, and Fred Astaire types dancing in the warming darkness of the Towering Inferno’s 153rd floor? 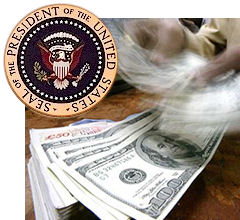 Big drippy crocodile tears splashed onto my keyboard as I read in this morning’s New York Times that Mr. Bush’s Inaugural with be too expensive for many of his 6-figure fund-raisers.
Sniffle!
What with admission tickets for various faux-snazzy events priced (in Enron scale) at a quite reasonable $2,500 per person, up and coming lawyer and gravy train wanna-be’s are being forced to trim expenses and, among other things, stay at (shudder) less expensive overnight venues.
Needless to say, I’m just sick that hordes of chinless young Rethuglicans, having grown accustomed to small town graft and the finer motels, will be forced to chafe their delicate rumps with abrasive 2-digit thread count linens at accommodations normally frequented by (again shudder) average honest citizens.
According to the Times:

Aw, doesn’t it just break your heart?
And, anyway, what kind of a freaking name is “Slater”?
Compassionate conservative Steve Schmidt, communications director for the Presidential Inaugural Committee, in a Social Security harbinger says:

People have the option of …attending the events that are free of charge.

A free Bush event???
Like maybe the Sharon Bush (Neal’s ex) Sterno-lit Dinner under a yet-to-be-selected bridge in Rock Creek Park?
Chez glamour!
Yes, at Sharon’s imaginary gala, price conscious fund-raisers will glimpse power party capitol nightlife watching radio personalities free-base and House members cruising for rough trade within the romantic and patriotic blue glow from flickering sterno-light.
Attendees should pack an extra blanket or two, finger-less gloves and, perhaps, a condom to pass a frosty January night awaiting a Presidential no show.
Ah, price-conscious fun in the price-conscious Imperium is always so price-conscious, isn’t it?
Reading between the NYT lines, I’m guessing casual Inaugural observers should restrict overt gloating as Bush supporters, specially these price-conscious ones, will tend to be ever more sen-ska-tive.
District of Columbia cabbies along with guest accommodation and service workers should also expect festive Bushies to be even more tip inhibited than usual while suffering through the economic hardships of this Georgian Inaugural…be forewarned, people, and offer equivalent service.

The gigantic scale of the tsunami tragedy is incomprehensible and defies the somewhat light-hearted mood I like to create within even serious postings.
I would urge readers to join with MoveOn.org in urging President Bush and the Congress to utilize America’s vast resources and world dominance to provide greater assistance to the global relief effort.
As has been widely reported, there are many agencies collecting money for the relief effort and my well-read readers don’t require links from this pitiful chunk of the Internet to facilitate that avenue of direct personal assistance. 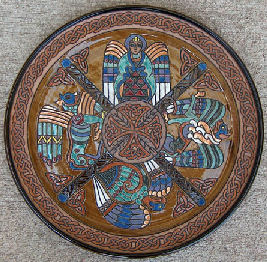 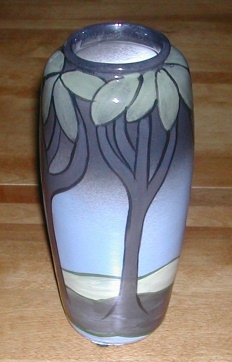 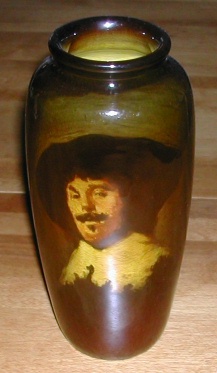 And, this lovely 8” 1903 Rookwood portrait vase by Grace Young inscribed After Franz Hals that exhibits the delicate brushwork for which Young is noted.
Young took a leave from Rookwood to study in Munich, Germany between 1891 and 1896.
It is likely that this portrait springs from a memory of Hals' c. 1625 Portrait of Willem van Heythuysen on exhibit at Munich's Alte Pinakothek.

On the cooking front, I’m becoming quite a fan of the Food Channel’s Paula Deen.
Paula has a great personality, a beautifully produced show and, most importantly, terrific southern-style recipes.
In my neck of the woods, different versions of Paula’s program air at 11:30 am and 4:00 pm.
Paula and pottery have been helpful diversions from the tragedy unfolding overseas.
My prayers are with the victims and their families.

I apologize for not, thus far, posting anything regarding the horrible tsunami tragedy in Asia.
I’ve been dumbstruck by the horror as Mother Nature proves herself the ultimate terrorist and we humans again uncomfortably view our puny place on her mantle. 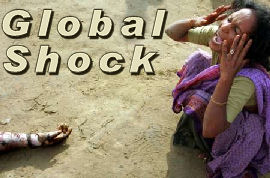 The idiot media, of course, deludes itself with pitiful attempts at numbering the innumerable and maintaining our western delusion of technical supremacy in the face of this horrendous event.
Our convenient small “c” Christian leader, as was breathlessly announced yesterday, will today descend from his penurious mountaintop and for the first time publicly remark upon the tragedy and sneer at embarrassing accusations of “stinginess”.
Regardless of the glib remarks by media and temporal leaders, death and devastation will haunt Asia and the world for months and years to come.
To give some small comparison, consider Hurricane Charley, which struck the southwestern Florida coast on September 13, 2004, and the following tiny example of the still ongoing recovery effort here in highly advanced America:
Florida friends, just prior to the Christmas holidays, told me Bowman’s Beach, the public beach at the join of Sanibel and Captiva Islands where Charley’s force was at its peak, only just reopened December 16th!
Three months to clear one public beach on islands where homes, resorts, and civic structures are still damaged and where many mainland residents are still living in tents.
Of course, not much is made of this in the national press; the lingering devastation and the painfully slow and even more damaging recovery from one of the four hurricane events, compared to the December 26th tsunami, offers but a tiny example of this leading world power's still marginal recovery from a tiny portion of nature's fury.
The Florida National Guard, always of major assistance in natural disaster recovery is occupied elsewhere and offers to the world, perhaps, a partial reason for America’s present behavior in the face of this historic calamity.
Another partial reason could lie in a certain world leader’s 3rd separate request for an additional $87 billion of American resources to fund the ill conceived Iraq tar baby.
How can America be generous at home or abroad when sons, daughters and $261 billion is being poured onto desert sand?
An already boggled mind is boggled further and fears of a vengeful and ecumenical God grow stronger. 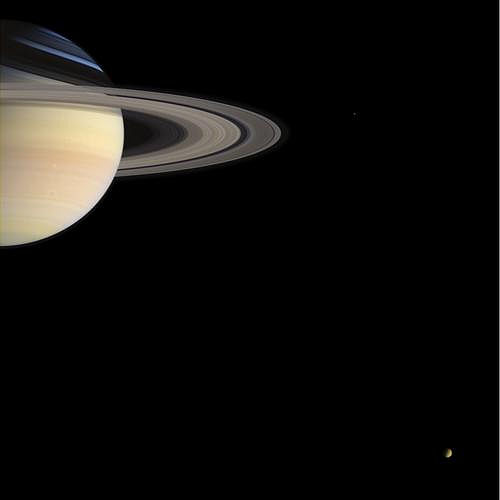 This superb image of Saturn's ring and southern hemisphere along with its mysterious cloud-shrouded moon, Titan (in the lower right corner of the image), was taken on Christmas Eve by the Cassini probe.
The European Space Agency's Huygens explorer successfully detached from the Jet Propulsion Laboratory's Cassini mothership during the evening of December 24th and will arrive on Titan January 14, 2005.
A bit of the joyful hope our human race is still capable of to balance the tragic comedy of yesterday evening's posting.