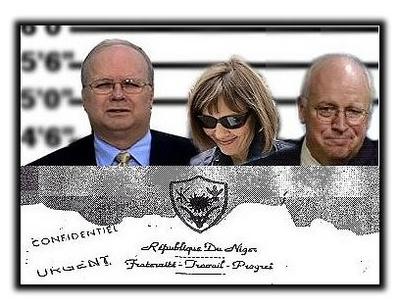 An article in Sunday’s edition of the British paper The Independent identifies a man heavily involved in the forging of the Niger yellowcake documents, documents that became the impetus for George Bush’s pre-emptive war against Iraq.
That man, Michael Ledeen:

Ledeen is an intriguing and enduring presence in the murkier parts of US foreign policy. He is an American specialist on Italy with a long-standing commitment to Israel. According to The New York Times, in December 2001, a few months after the CIA first heard the Niger claims, Ledeen flew to Rome with Manucher Ghorbanifar, a former Iranian arms dealer, and two officials from OSP [Douglas Feith’s non-CIA intelligence group at the Pentagon, the Office of Special Plans], one of whom was Larry Franklin. In Rome they met the head of Sismi.

Astute observers know that Karl Rove is sometimes referred to as “Bush’s Brain”. But fewer know that, as far as foreign policy goes, Rove’s brain is Michael Ledeen…the two appear to have met after Bush’s disputed election/appointment in 2000…Ledeen is considered radical even by some neocons. He first came to national attention by initiating, along with his arms dealer friend Manucher Ghorbanifar, the reported basis of the Iran/Contra scandal — the idea of trading arms for hostages…In the seventies, he was Rome correspondent for The New Republic. At that time he apparently developed some rightwing connections to Italian intelligence (SISMI), and para-intelligence, the notorious Propaganda Due Masonic Lodge.

As indictments in the Plame matter loom, may I suggest some very interesting reading?
Jim DiEugenio’s, lengthy but fascinating, RoveGate Part 1 and Part 2, a 2003 Newsweek article by Michael Isikoff and Evan Thomas and a translation of a July 16, 2003 article concerning the Niger break-in published by the Italian newspaper La Repubblica.

From the paid subscriber section of the New York Times and Frank Rich:

The most distressing aspect of Mr. Bush's press conference last week was less his lies and half-truths than the abundant evidence that he is as out of touch as Custer was on the way to Little Bighorn.